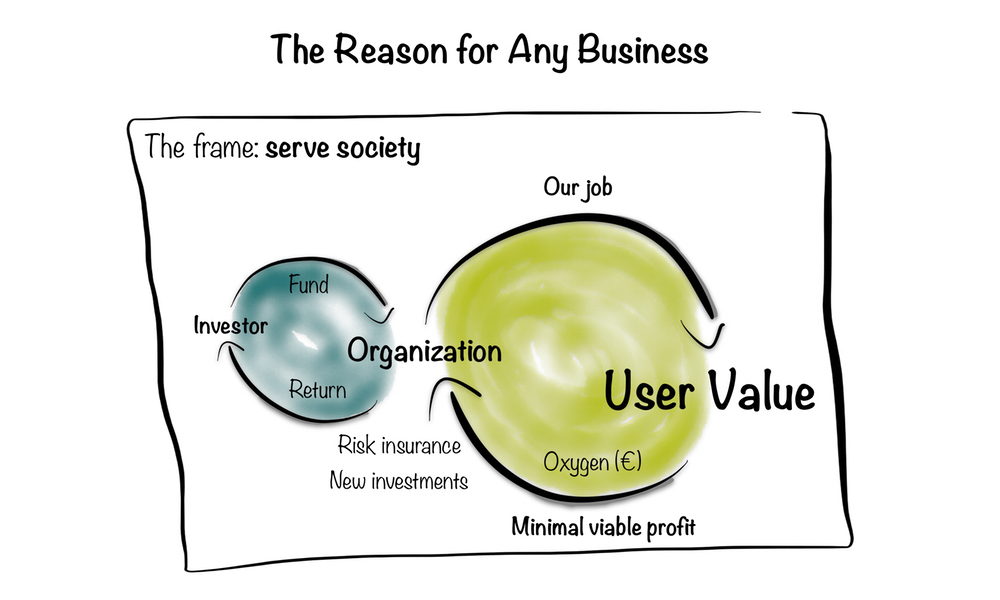 This is 2nd of 15+ frameworks I found most valuable for doing business. It is foundational as it challenges us to think why we do business at all. Virtue comes from personal conviction.

The framework is a personal mesh-up of various sources. First, and foremost, it rests on Peter Drucker’s famous quote:

There is only one valid definition of a business purpose: to create a customer.
—Peter Drucker (1954), The Practice of Management, pp. 39–40

He has also illuminated the meaning of profits as minimal viable profits in this Wall Street Journal Article from 1975.

Fredmund Malik has built on Drucker and defined the job of management to transform resources to customer value.

I have stolen the term oxygen from the Netflix cultural paper.

Lastly, the work of Hans Christoph Binswanger is the theoretical foundation of the investment loop.

What it is all about

The framework is a reminder how to think at the most fundamental level about the purpose of any business – or more precisely how I think about it.

First, any business or organization is there to serve society – and not the other way around. Why is that?

The society defines the rules of the game. Business people nowadays often think that the economy is theirs. They do not realize anymore that they are granted a role by society. In our business world, society allowed to found corporations (companies, enterprises) and make profits. Corporations are given special rights, in particular the right to act legally like a natural person. We believe that corporations are beneficial and sometimes better than other organizational forms for delivering value to society. That is the reason why we allow them. For example, in the 19th century, corporations were formed in America in order to build railways. Corporates were granted a charter by society that could even be withdrawn in the early days if they ceased to add value to society.

In Germany, the Social Market Economy was introduced in order to create prosperity for everybody. Individual freedom and responsibility, including the ability to make a profit and act as an entrepreneur, were seen as the mean towards the end of a better society.

Lastly, the concept of an honorable merchant exists since the medivial ages. It is about doing business such that it is a respected and serving part of society.

Now, in order to start any company, you need some initial capital investment. That is because you first have to build or produce something before you can sell it. This is made possible by the capital from an investor (an entrepreneur himself, equity investors, or banks).

As an employee or an executive of a company your job is to serve the company. In particular for the executives in Germany, this is stated in the respective laws that govern corporations.

The main aim of any company is to offer a product or service such that it generates user value. It is the job of any employee, in particular managment, to create user value. This is the way a company does its service to society. If there is indeed user value, than it can be monetized to a certain extent. This is the oxygen a company needs in order to survive. The company must create enough user value and monetize it sufficiently in order to retain its right to live. I.e. it has to make enough revenues not only to cover it running cost, but generate the minimal viable profit (MVP) to cover its cost for survival. There are three parts to this minimal viable profit:

Why I find it valuable

The framework challenges us to think why we do business at all. I don’t agree with the claim that we are in business in order to increase shareholder value. Some arguments against the shareholder value theory can be found here and here, both from Steve Denning.

I want to be a responsible executive. For this I find it important to understand for myself my fundamental beliefs about business, a corporation, and my role in it. It is only from this fundamental belief that virtue can arise for the daily job I do.

In many discussions in the digital world, I meet people who see a trade-off between user value and earning money. I fundamentally disagree with that view. Earning minimal viable profits is necessary to survive as a company and the best proof that you deliver user value. People truly value a product and service if they are willing to pay money for it. Out of this reasoning, I also appreciate much more businesses that are able to convince users to pay for products and services rather than making users the product (i.e. advertising models).

I acknowledge that still many trade-offs remain, for example how much to charge or short-term vs long-term effects. The framework can help to have a deeper discussion about those topics.

Caution: don’t fall in love with a framework. They support, not replace thinking. Frameworks always have a point of view on reality. There are other views as well. Stop using a framework if it doesn’t help to create insights.