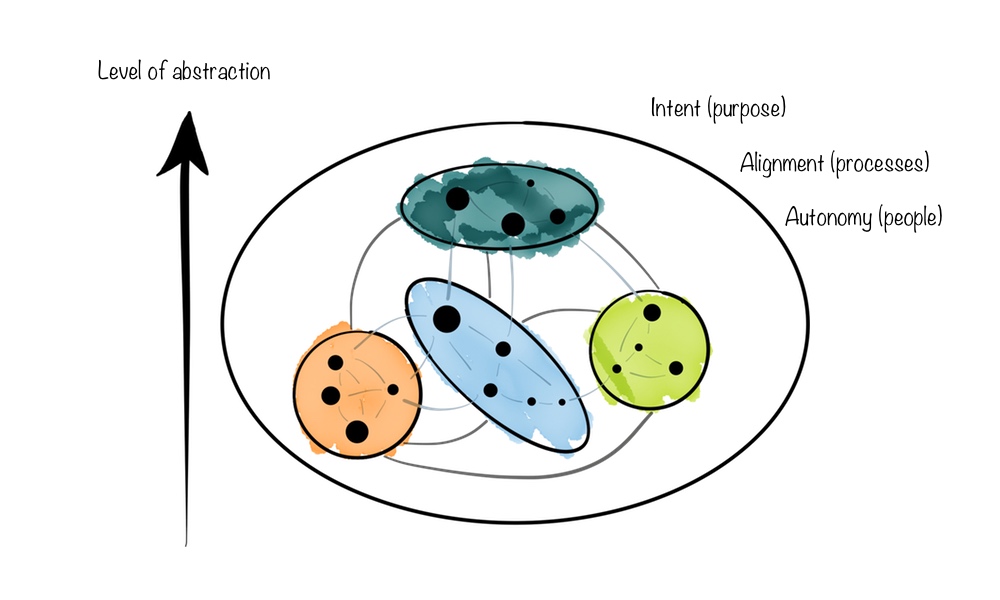 I believe that very often the concept of hierarchy is ill-defined and misused. Because of ideological debate and personal ego, the function of hierarchy is not appreciated nor utilized where it should.

But let’s do one step after the other. This post is triggered by the article ’The Organization is Broken‘, written by Clay Parker Jones. In my link share about the article, I wrote that I will follow up on the topic of hierarchy. So this post is about my view on hierarchy.

Clay mentions the following issues with hierarchy. His critique is widespread and commonly shared – in particular in the digital industry I work in:

Now, how do I think about hierarchy? In organizations, there are two important perspectives when you look at hierarchy: individuals and the organization as a whole.

Hierarchy viewed from an individual perspective

An individual member of an organization experience hierarchy through his boss and formal decision power along chains of command. Clay’s issue number 4 addresses this individual perspective. In this context, hierarchy is rejected with the argument that it limits individual freedom, initiative and motivation. And it is often said that bosses do not know better than than their subordinates or are just not capable to lead. Out of my personal experience as a subordinate and boss, I disagree with this general view.

In my experience, everybody at work has to find the right balance between two positive values (see framework No 6: the value quadrant): self responsibility and safety. We want to be the owner of our destiny. At the same time, we also need safety and reassurance. The balance is different for each individual at different points in time. Too much responsibility, and you end up being overwhelmed. Too much safety and you become dependent.

For each of us, a superior can and should play two roles: first, he should provide the right amount of safety. Many people want and need a fair amount of safety. They are happy to get a clear frame of responsibility and act within that frame. The boss takes the remaining responsibility and relieves the subordinate. Second, a boss can help to become more self responsible. You learn best when you are out of your comfort zone but not in your panic zone yet.

Not all people are equal. If your boss has a higher cognitive, motivational, or emotional capacity out of talent and experience, he can be of great help. I very much believe in the concept of master and student. This is in fact a hierarchical set-up. And a relationship that is chosen by the master and the student.

Of course, not all bosses are great. And no boss is perfect in everything. And maybe, the majority of bosses are just human beings who have difficulties in living up to the expectations I laid out above.

Now what? As an individual, you should not ask: do I like hierarchy or not? Rather, you should ask yourself:

Regardless of formal hierarchical power, is my boss helping me to find the right balance of self responsibility and safety, and thereby supporting my personal growth and fulfillment at work?

Or even shorter: Do I want to work with this person as a boss in this company?

If not and you cannot improve the situation: quit. Find another boss – either in your current company or another company; or become your own boss. People complaining about their boss but not taking actions are refusing to take responsibility for their own life. They are not leading themselves.

Complaining about hierarchy also hints to a misconception about the concept of power and its distribution in the ’boss – subordinate’ relationship. There are four possible stages in this relationship:

As you can see, power is never unilateral. A boss has only the power it has been given to him by the subordinates. The boss’ power of decision making is overrated. As a boss, you always have to consider how your subordinates will react to a decision.

Hierarchy viewed from an organizational perspective

In our economy, each company always has at least two levels of hierarchy: the owner (or CEO as the principal) is always special and hierarchically above everybody else. The owner incorporates the company and can decide to liquidate it. And this owner can always decide how to run the company. Even if the the owner (or the CEO as a principal) decides to run a company in a formally non-hierarchical way: he always has the power to change the rules of the game. And it happens that (new) owners or (new) CEOs return to more traditional styles of management, especially in difficult situations. There are a few examples in the book ‘Reinventing Organizations’.

So the owner or CEO of a company has to decide how to run the company. Very often, the discussion is reduced to the question of having hierarchy (traditional org chart) or not (self organizing, networked company).
This misses the point. The real question to answer is:

How do I as an owner or CEO secure or even increase organizational performance in our world of increasing technological and social change?

At a minimum, this always existing minimal hierarchy of two levels means that the the owner / CEO uses his power as a system engineer who defines the rules and constraints of the system.

I agree with Clay on many trends and observations, in particular:

In this other post which is mainly influenced by the work of Stephen Bungay, I have written about the increased friction we see and the three main task that must be done for a better organizational performance. You have to create

I do believe that in order to do these three tasks sufficiently and better in our current world, organizations will and should become more networked. At the same time, I do see merit in hierarchy for those three tasks. In fact, I believe that the best networked organizations will leverage hierarchy. (Side-note: it is yet another question, how to create and develop this hierarchy over time. In particular, by which mechanisms hierarchical power is granted or withdrawn.)

My belief on hierarchy is based in three fundamental personal observations:

In order to improve the organizational performance, I find it important to combine network and hierarchy elements. At the very least, managers must use their power to improve the capacity of the system. This is done through second order levers of intent (or purpose), alignment (or processes), and autonomous units (or people).

Sense making is a task that profits from higher connectedness. Senior management (i.e. hierarchy) has to support the flow and accessibility of information, in particular designing ways that relevant connections are created – not everybody uses or needs all information. In addition, the focus must be on insights rather than pure information. Creating insights means filtering, grouping, and ordering of information. It is important to create insights on the right level of abstraction.

Clarity of intent also means making strategic choices. These are the choices that are not clear, i.e. cannot be calculated, but are best-informed leaps of faith. Somebody has to make a call. This problem can be solved through a hierarchical structure. However, you should make sure that relevant facts and opinions have been heard. This again calls for the right structure of connectedness.

There is no truth but only perspectives. Everything said is said by somebody from a specific point of view. In order to get buy-in and understanding, you have to create a shared context. This means more connectedness than we usually have in organizations. Hierarchy can help to create an environment that increases the likelihood of a shared context.

After that resources have to be allocated to different teams, units, activities. Allocation is difficult when the units are horizontally on the same level. You need mechanisms to come to a decision when agreement is not possible. Hierarchy enables prioritization across horizontal units – either directly or by defining processes for it.

The more you are able to create units that can act independently of each other the better. Hierarchy can support this setup in two ways: first, it can support the creation of meaningful units that can act as independently as possible. Second, hierarchy can make sure that the task those units are charged with get them out of their comfort zone, but not in the panic zone. Competence and responsibility have to be matched.